Phillip Villarreal's First book is available from these online Retailers: 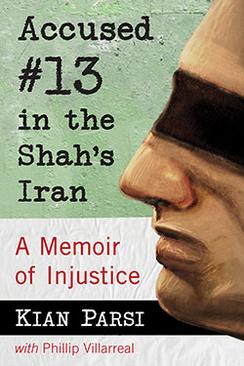 In 1953, Mohammad Reza Shah Pahlavi—the Shah of Iran—rose to absolute power in a CIA-assisted coup d’état dubbed Operation Ajax. As Iranian citizens began to learn of their government’s involvement in the coup, ordinary people—scholars, lawyers, students, military personnel—began to disappear.

Drawing on the political and geographic history of Iran before the 1979 Revolution, this memoir of a political prisoner of the Shah’s regime recounts a soldier’s brutal arrest, imprisonment, interrogation and torture by state security over 50 days in 1969 and 1970.

About the Author(s)
Kian Parsi was born in Tehran and studied economics at Tehran University. As a professor of economics in the United States and Iran, he has written numerous publications on the subject. Writer/editor Phillip Villarreal has worked with many authors, most notably Firouzeh Razavi. He lives in San Dimas, California.